“The real drama since 1776 has been the relentless attack of the prosperous few upon the rights of the restless many.”      Noam Chomsky

Noam Chomsky is a political activist whose criticisms of U.S. foreign policy are often controversial. An advocate for popular struggle to achieve real democracy, he is also scathing in his critique of what passes for democracy in the U.S.

In this post I outline three of the key positions that Chomsky has held for decades and invite you to comment on these controversial but crucial issues. Do you agree with Chomsky that this really is how the world works?

The U.S. government is subordinate to private power

According to Chomsky, corporations set the conditions within which the U.S. government operates, and control it to a large extent. In his view, more and more power has been put into the hands of unaccountable corporations whose primary function is generating profits for their shareholders rather than delivering any public good.

Chomsky also argues that there is no such thing as a free market economy. If there were such a thing, he says, it wouldn’t last three seconds – mostly because business wouldn’t let it. Instead, corporations rely on powerful governments to protect them from free markets. What exists in the U.S., and what has spread around the world in recent decades, is not free market capitalism, but giant corporations that are supported by, and rely on, governments.

As evidence for this Chomsky argues that every single one of the companies on the Fortune 100 list of the largest transnational corporations has benefited from interventionist industrial policies, and that many would be out of business if it weren’t for public bailouts.

The parts of the US economy that are able to compete internationally are primarily the state subsidised ones: capital intensive agriculture, high-tech industry, pharmaceuticals, and biotechnology. This system of public subsidy and private profit is what is called free enterprise.

On U.S. political parties, Chomsky believes that there is little difference between the Republicans and Democrats, both of which primarily represent the interests of big business. That said, while there are plenty of things wrong with government, Chomsky holds that it is the only defence people have against corporate power. 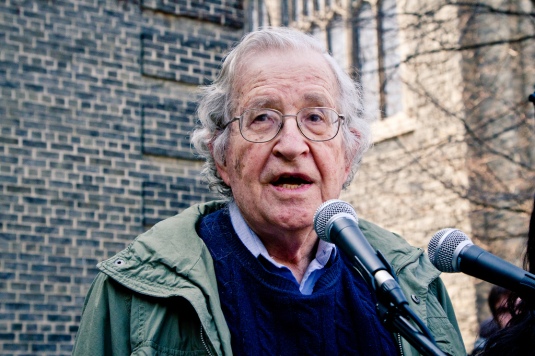 The US government uses war as a tool of economic policy

“I think legally speaking there’s a very solid case for impeaching every American President since the Second World War. They have all been either outright war criminals or involved in serious war crimes.”                Noam Chomsky

U.S. Policy Planning Study 23, written by George Kennan for the State Department in 1948, stated: “We have about 50% of the world’s wealth but only 6.3% of its population… Our real task in the coming period is to devise a pattern of relationships which will permit us to maintain this position of disparity… “

Chomsky quotes Kennan’s policy paper, and argues that the way the U.S. has maintained this disparity has been by intervening repeatedly in the affairs of countries around the world. This intervention has been carried out both covertly and through the use of military force.

The U.S.’ wars of economic domination have been particularly damaging in three regions of the world, Chomsky argues – Central and South America, the Middle East, and East Asia.

He points out that parliamentary governments were barred or overthrown with U.S. support in Guatemala in 1954, in the Dominican Republic in 1963 and 1965, in Brazil in 1964, and in Chile in 1973, among others. In Central America, the number of people murdered by U.S.-backed forces since the late 1970s was around 200,000, as popular movements that sought democracy and social reform were decimated.

In the Middle East, Chomsky holds that the U.S .has as much control and domination of the region as any outside force could hope to maintain. ‘Our outpost there, Israel, is by far the main military, technological, industrial and even financial centre. The huge oil resources of the region are mostly in the hands of family dictatorships, brutal tyrannies that are highly dependent on the US and subordinated to its interests. ‘For over half a century, he argues, the U.S. has achieved its major goals in the Gulf – ensuring that the enormous energy resources of the Middle East remain under U.S. control, and that the profits they produce flow into the economies of the US and Britain –through support for local tyrants and the use of force.

According to Chomsky, the U.S. wars in Indochina fall into the same pattern. He cites U.S. support for the Suharto takeover in Indonesia in 1965, and U.S. backing for the overthrow of Philippine democracy by Ferdinand Marcos in 1972. Suharto’s coup involved the slaughter, in a few months, of around 700,000 people, mostly landless peasants. In Cambodia, the US supported the Khmer Rouge after the genocide under Pol Pot. Writing about Indochina, Chomsky has said, “We killed a couple of million people and destroyed three countries [Vietnam, Cambodia, Laos] and left them in total wreckage and have been strangling them ever since.”

Inequality is written into the system by the rich

“There’s a constant battle between people who refuse to accept domination and injustice and those who are trying to force people to accept them.”            Noam Chomsky

According to a recent Oxfam report, the wealth of the world is divided in two: almost half going to the richest 1%; the other half to the remaining 99%. In the U.S. the wealthiest 1% captured 95% of post-crisis growth since 2009, while the bottom 90% became poorer.

For Chomsky, this inequality is not an accidental side effect of capitalism, but a direct consequence of the fact that the powerful have been writing the rules for their own benefit. Chomsky argues that there has been a very committed effort to convert the U.S. into something resembling a Third World society, where wealth is highly concentrated, resources are used to protect the wealthy, and the general public finds itself disempowered and struggling to make ends meet.

In his view the real question for every country is simple: can they control their own wealthy? If not, democracy will continue to be undermined, leaving the majority of people in a position of subservience to the powerful few. Chomsky’s concerns echo those of US Supreme Court Justice Louis Brandeis who said in the early years of the 20th century, ‘We may have democracy, or we may have wealth concentrated in the hands of the few, but we cannot have both.’

The key to progress, Chomsky urges, is popular politics that represent the majority, rather than being captured by a tiny minority. He reminds us that the current economic and political systems are not based on laws of nature. The processes, and the institutions that engender them, could be changed. But that will require major cultural, social and institutional changes, he argues, including democratic structures that go far beyond periodic selection of representatives of the business world to manage domestic and international affairs.

While Chomsky welcomes the real advances that have been made in securing the rights of African Americans, women, and gays and lesbians in the United States, he warns that these very positive changes can occur, but still leave the centres of power untouched. Obama has become President – and maybe Hillary Clinton will too – but their rise to the highest position of power in government may leave the basic facts of how the U.S. economic and political systems works totally unchanged.

So is this how the world really works? Please share your views…

Quotes are taken from Noam Chomsky, How The World Works, Hamish Hamilton, 2012

DisorderedWorld is a site dedicated to exploring the damage that psychopaths and narcissists cause in our world. For those new to the site, here is a list of the Top 10 most popular posts. The list covers Pol Pot, Stalin, Mao, Islamic State, narcissistic bosses, religion and evil, and more…

11 thoughts on “Noam Chomsky and How the World Works”