This post is the second of three which look at thirty five years of conflict in the Middle East, and seven steps that have led to the emergence of ISIS.

The Iranian Revolution in 1979 triggered Saddam Hussein’s invasion of Iran and the beginning of the eight-year long Iran–Iraq war. It also marked the escalation of the battle within Islam between Shia Muslims and Sunni Muslims, as Saudi Arabia began to spend billions of dollars to export its fundamentalist form of Islam across the world.

In 1988, the Soviets finally began withdrawing their forces from Afghanistan. By early 1989 the last of its soldiers had left the country. Then, in December 1991, the Soviet Union itself collapsed.

As the West celebrated the triumph of democracy and capitalism over communism, many in the Muslim world drew a very different conclusion: it was by God’s will that the jihadis had overcome the Soviets in Afghanistan and brought about the collapse of the Soviet Union. The Islamists had a point. Throughout the 1980s, Saudi Arabia had provided more assistance to anti-communist forces around the world than had the United States. [1]

The end of the Iran–Iraq war in August 1988 brought only a short period of relative peace to the region before Saddam Hussein launched another hostile attack on a neighbouring state. On 2 August 1990 the Iraqi army invaded Kuwait. After two days of fighting, Hussein declared Kuwait to be the 19th province of Iraq. With Hussein’s forces massed close to Saudi’s rich oil fields, Iraq now represented a direct threat to Saudi Arabia.

One of the many Saudi citizens who had taken part in the battle against the Soviet Union in Afghanistan was Osama Bin Laden. Before leaving Afghanistan, Bin Laden had set up a data base of jihadi fighters who had taken part in the war there. He called his organisation Al Qaeda – qaeda being Arabic for database. Whenever jihad needed fighting, experienced volunteers could be contacted quickly using this database.

Bin Laden at this time was not seen as a villain. As Robert Lacey writes in ‘Inside the Kingdom’, because of his efforts in Afghanistan, he was seen as a hero, ‘using his wealth to help a noble cause that was supported by the Saudi government – and by the American government as well.’ [2]

When Hussein invaded Kuwait, Osama Bin Laden approached a member of the Saudi Royal family with an offer of support. He offered to mobilise the jihadi fighters on his Al Qaeda database to fight a guerrilla war against Hussein within Kuwait.

In January 1991, the US-Arab coalition’s air bombardment of the Iraqi armed forces in Kuwait began. The bombing campaign, which lasted 38 days was aimed at demoralising and destroying Iraqi resistance ahead of a ground invasion. When the ground invasion began, Saddam’s army surrendered after less than 100 hours of combat.

The coalition which had come together to expel Saddam from Kuwait had no agreed aims beyond that. The US President George Bush later stated that if the US had toppled Saddam it would have meant the US effectively taking on responsibility for ruling Iraq, something the US did not want to do at that time. Saudi Arabia was not keen to topple Saddam either, knowing that doing so risked handing power to a Shia led government in Iraq.

According to Bush’s Defence Secretary Dick Cheney, “The question for the President, in terms of whether or not we went on to Baghdad and took additional casualties in an effort to get Saddam Hussein, is how many additional dead Americans is Saddam worth? Our judgement was ‘Not very many.’” Ten years later, as Vice President, Cheney was to argue exactly the opposite. [3] 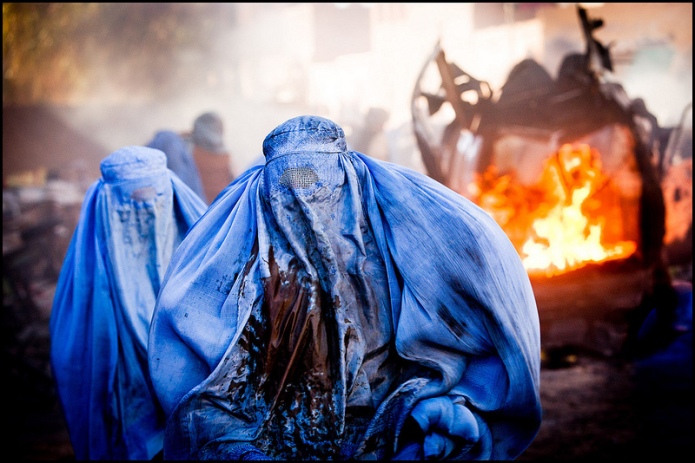 Step 5: Rise of the Taliban and Al Qaeda

Following the Soviet withdrawal from Afghanistan in 1989 the country descended into a brutal civil war. From amongst the warring factions a student army, the Taliban, arose aimed at unifying the country under strict Islamic rule.

The madrasas that had been funded by Saudi Arabia and the United States played a pivotal role in the creation of the Taliban. Within the madrasas the students’ education focused on the black and white rules of fundamentalist Islam, and on the just and perfect society that Mohammed was able to create fourteen centuries ago.

The Taliban received vital support in terms of finance and arms from the Pakistani Inter-Service Intelligence ISI. According to one Saudi diplomat the U.S. and Saudi Arabia played a more sinister role. ‘The fighting with the Soviets had tragic consequences – it was creating a lot of orphans,’ the Diplomat recalls, ‘So some of us in Washington did some brainstorming. “What better source of future fighters,” we said, “than these boys whose fathers have been killed by the Russians.” The plan was to find them, clothe them, put them through school – then ship them to the front. The Saudis get the blame for the madrasas now, but let’s not forget that many of them were part of a joint US-Saudi project to take these poor kids and make them warriors for the West.’ [4]

By the end of 1996, under their leader Mullah Omar, the Taliban had taken Kabul and twenty two of the country’s thirty one provinces. A vehemently sectarian organisation, they declared Shia Muslims to be infidels and massacred thousands of Shias across Afghanistan. The Taliban also enforced their ultraconservative form of Islam on the nation – girl’s education was banned, women were forbidden from working, the burqa was made compulsory, TV, kite flying, pool tables, music, toothpaste, and makeup were all banned. These draconian regulations were enforced by religious police squads modelled on the Saudi model of fundamentalist vigilantes. In Saudi Arabia, these developments were enthusiastically praised by the Saudi ulema.

Bin Laden took advantage of the rise of the Taliban and moved his base from Sudan to Afghanistan. Although he had played no role in the Taliban’s rise, on arrival in Afghanistan he was given the protection of Mullah Omar and began working with the Taliban to set up jihadi training camps. According to Saudi intelligence estimates, by the beginning of 1998 there were around 8000 non-Afghani fighters in these camps.

On the eighth anniversary of the arrival of US troops in Saudi Arabia prior to the first Gulf War, Al Qaeda launched the first of its international attacks. On 7 August 1998, suicide bombers attacked the US embassies in Nairobi and Dar Es Salaam within eight minutes of each other. Two hundred and twenty four people were killed and more than four and a half thousand injured. In response, the Clinton administration launched missile attacks on a suspected chemical weapons factory in Sudan, and on Al Qaeda training camps in Afghanistan.’

Bin Laden was at last receiving the international attention he had sought for so long.

Part 1 of this series can be read here. Part 3 will deal with the Arab Spring, the beginning of the war in Syria, and the emergence of Islamic State.