This post, the first in a regular series, aims to provide a snapshot of the major issues shaping global politics by presenting short quotes from recent stories in the news. Today’s blog focuses on a selection of recent stories from the U.K. Financial Times newspaper.

Please feel free to add recent quotes from your national media which you think will be of interest to readers of Disordered World around the globe.

The EU in Crisis

[T]he current cocktail of problems facing Europe – refugees, the euro, and the danger that Britain might leave the union – look far more likely to overwhelm the EU than to strengthen it… For people of my generation, one of the central political themes of the past 40 years has been the steady advance of the European project. It is hard (and alarming) to imagine all that going into reverse.

Gideon Rachman, The crises that threaten to unravel the EU, Financial Times, September 14, 2015

The refugee crisis confronts the EU with an existential challenge far greater than that posed by either the euro or the Greek financial crisis. Members of the union – so vocal on the subject of finance – seem far less so on fundamental values: human rights and the right of refugees to decent treatment.

At moments of severe stress, the simple solutions of the populists can seem as beguiling as they are fraudulent. This is why the EU was invented. Today’s leaders have painfully short memories.

Philip Stephens, Do not blame Merkel for the refugees, Financial Times, October 1, 2015

The global economic crisis might have recast liberal capitalism. Instead, the financial elites got off more or less scot-free and the political establishment instead prescribed indefinite austerity for the masses. It is scarcely surprising that populists of right and left are now rewriting the rules of politics…

To say that capitalism is better than all the alternatives should not be to assume that things must stay as they are. The brand of unbridled capitalism that hands all the gains of open markets and economic integration to the top 1 per cent, while piling austerity and insecurity on the rest, is politically unsustainable. In many respects, the big surprise of the populist insurgency is that it has not been even bigger. In another age, the 2008 crash might have triggered revolution. 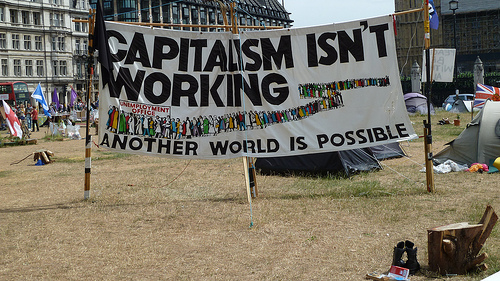 I believe the public’s disenchantment with the centre-left has [several] causes. First, many centre-left politicians still do not fully accept or understand the free market as the basis of our socio-economic model. This makes them less credible and less competent when it comes to fixing its many problems. [Also], for too long the centre-left has ignored some of society’s major challenges including climate change, the impact of non-western immigration on European societies, and the rising cost of the welfare state… Finally, mainstream centre-left parties have become the preserve of career politicians, ruling elites and societal vested interests.

[T]he challenge facing [China’s] policy makers is huge. They need to re-engineer a slowing economy without crashing. Moreover, the challenge is not only, or even mainly, technical. A big question is whether a market-driven economy is compatible with the growing concentration of political power. The next stage for China’s economy is a conundrum. Its resolution will shape the world.

Mr Putin has consolidated the Kremlin’s power by stripping all rival institutions of authority and legitimacy. Over the past 15 years, he has neutered parliament the regional governors, the free press, the opposition and the law courts. From any long term perspective, the striking feature of Mr. Putin’s Russia is not its strength but its alarming brittleness… A weak Russia may be even more worrying than a strong one.

Hopes that India can replace China as the engine of global growth are wide of the mark… India’s output is one-fifth that of China’s. India makes up a mere 2.5 per cent of global GDP against a hefty 13.5 per cent for China. If China grew at 5 per cent annually, it would add an Indian-sized economy to its already hefty output in less than four years.

[T]he share of the world’s population that enjoys a free press stands at no more than 14 per cent. That means that only one in seven people lives in a country where coverage of political news is robust, the safety of journalists is guaranteed, state intrusion in media is minimal and the press is not subject to onerous legal or economic pressure.

Pakistan could have the third biggest arsenal of nuclear weapons, after the US and Russia, within a decade if it continues to produce up to 20 nuclear warheads annually… The build-up of nuclear capacity is striking in the context of efforts to prevent neighbouring Iran from developing nuclear weapons.

3 thoughts on “Our Disordered World October 2015”