Trump’s campaign forcefully reminds us that psychology is central to politics. Despite the so called ‘Goldwater Rule’, which prohibits psychiatrists from commenting on a public figure’s mental health without having personally examined the individual and received their permission to do so, dozens of mental health professionals have issued stark warnings that Trump suffers from narcissistic personality disorder. Aside from Trump’s personal attributes, evidence to support this controversial assertion can be found in the defining characteristic of Trump’s campaign, namely the angry narcissistic fog which he has brought down upon America.

Despite the fact that the twentieth century was scarred by individuals who suffered from this disorder, including Mao, Stalin and Hitler, malignant narcissism is not well understood by the public. Popular discourse on the issue is often confused and unproductive, with each side simply pointing fingers and accusing the other side’s leader of being a narcissist. Sadly, the very real danger that leaders with this disorder pose is lost in the ensuing din. After Trump, it is essential that this ignorance is addressed. To do so, we need to focus not only on the individual leader, but on their followers, on the circumstances that facilitate their rise, and on the warning signs that society is falling under their control.

Consider first the warning signs. Perhaps the most distinctive feature of Trump’s entire campaign has been what commentators have been calling the end of reason. Lies, conspiracy theories and the denial of obvious truths have been Trump’s hallmark. They are also well-known symptoms of narcissistic personality disorder. In their interactions with others, someone with this disorder is compelled to prove their self-perceived superiority. In order to achieve this, facts can be discarded, lies can be told, and positions can be changed at random in the service of the only thing that matters – that the narcissist proves his superiority and leaves his opponent defeated. When these are the rules, the real victim is the truth.

For narcissists, the end of truth-based discussion is accompanied by the second hallmark of Trump’s campaign – torrents of righteous anger. This too can be understood as a direct consequence of narcissistic personality disorder. Convinced of their own superiority, narcissists feel outraged at anyone who dares to challenge them. For Trump this ‘narcissistic rage’ seems most pronounced when women, whom he views as particularly inferior, dare to cross him.

Fact-light decision making driven by narcissistic rage, however, is not only Trump’s personal way of operating. His angry post-truth politics – his angry narcissistic fog – has been enthusiastically embraced by wide swathes of the U.S. electorate. This translation of individual psychopathology into mass psychopathology is not something an individual, even Donald Trump, can achieve alone. 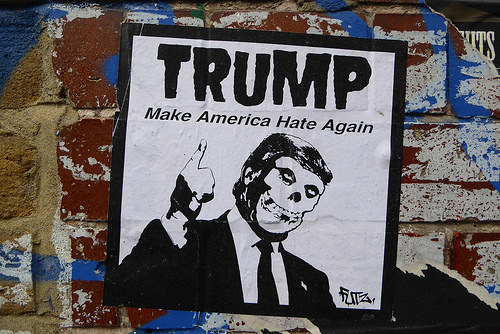 Hillary Clinton’s politically incorrect comment that many of Trump’s supporters are a ‘basket of deplorables’ nevertheless captures one secret behind the success of his campaign. In fact, baskets of deplorables have lain behind the rise to power of every toxic leader, from Stalin to Hitler.

As political scientist Betty Glad points out, for a deeper understanding of the danger that a malignantly narcissistic individual poses to society we must look beyond the individual leader to what is known as the ‘toxic triangle’ of dangerous leader, susceptible followers, and conducive environment.

So consider those susceptible followers. Any individual who rises to power must do so with the help of both a core group of supporters and a wider support base within the general population. As psychologist Andrew Lobaczewski has warned, individuals who also suffer from personality disorders form a key constituency within a narcissistic leader’s core group of followers. Malignant narcissists already in positions of power in politics, media, academia, and in local political organisations respond to the opportunities that the pathological leader’s ascent to power presents for them to pursue their own ambitions, regardless of the consequences for others. This relatively small but influential ‘basket of deplorables’ help to establish the anger and post-truth characteristics of the individual leader as the new norm. Faced with this group’s dissonant propaganda, the general population experiences a growing collective confusion, loss of common sense, and an increasing inability to hold onto previously accepted standards of reason and morality.

Reflecting on the role that this core group have played in Trump’s campaign, human rights campaigner Gary Kasparov tweeted that Trump has acted ‘as a useful litmus test to find those who have neither political values or personal morality’.

This analysis of the catalytic role played by followers with dangerous personality disorders does not, however, allow us to escape the essential role that psychologically normal people play in aiding toxic leaders in their rise to power. In fact, as history tragically shows, when the circumstances are right, toxic individuals like Trump will almost inevitably arise and find a mass following. To understand why this is so, we must consider the third side of the toxic triangle – the conducive environment within which dangerous leaders gain widespread popularity.

Today’s political circumstances are an almost perfect storm of inequality, economic hardship, terrorist threat and democratic decline. Unfortunately, under such conditions many of us can become more willing to accept assertive leaders and more ready to blatantly dehumanise our perceived enemies. Many of us who act from the ‘better angels’ side of our character when circumstances are good can unleash our ‘inner demons’ when we feel angry or fearful. It is precisely this malleability of human nature that allows strongman leaders, stoking widespread public fear while posing as protectors against dangerous alien forces, to gain widespread support.

An understanding of the true nature of malignant narcissism, along with the dynamics of the toxic triangle, can give us a crucial insight into the angry post-truth politics that Trump has fomented. This understanding should also serve as a warning. Narcissistic leaders are not interested in, or capable of, diagnosing the problems that bedevil our world. Their talent lies simply in sensing the public mood of anger and disillusionment and exacerbating these emotions as a means of gaining power. Now that Trump has been elected, the angry narcissistic fog he has created will not lift. Instead it will grow ever thicker. Guided by his truncated vision, Trump’s Presidency will most likely see America, and much of the rest of the world, stagger blindly into an ever darkening future.