Harvey Milk, gay activist and human rights leader, was one of the first openly gay elected officials in the world. The transformation of many societies in their attitudes not only to gay people, but to women, to people of different race, to people with disabilities, have all come about mainly through civic activism and democratic debate. Democracy has been a pathway to freedom for women and minorities around the world. In the extracts from his speech given after his election Harvey Milk reminds us that democracy is, ultimately, about hope.

Like every other group, we must be judged by our leaders and by those who are themselves gay, those who are visible. For invisible, we remain in limbo–a myth, a person with no parents, no brothers, no sisters, no friends who are straight, no important positions in employment. A tenth of the nation supposedly composed of stereotypes and would-be seducers of children–and no offence meant to the stereotypes. But today, the black community is not judged by its friends, but by its black legislators and leaders. And we must give people the chance to judge us by our leaders and legislators. A gay person in office can set a tone, can command respect not only from the larger community, but from the young people in our own community who need both examples and hope….

I can’t forget the looks on faces of people who’ve lost hope. Be they gay, be they seniors, be they blacks looking for an almost-impossible job, be they Latins trying to explain their problems and aspirations in a tongue that’s foreign to them. I personally will never forget that people are more important than buildings. I use the word “I” because I’m proud. I stand here tonight in front of my gay sisters, brothers and friends because I’m proud of you. I think it’s time that we have many legislators who are gay and proud of that fact and do not have to remain in the closet.

… in San Francisco, three days before Gay Pride Day, a person was killed just because he was gay. And that night, I walked among the sad and the frustrated at City Hall in San Francisco and later that night as they lit candles on Castro Street and stood in silence, reaching out for some symbolic thing that would give them hope. These were strong people, whose faces I knew from the shop, the streets, meetings and people who I never saw before but I knew. They were strong, but even they needed hope.

And the young gay people in the Altoona, Pennsylvanias and the Richmond, Minnesotas who are coming out … The only thing they have to look forward to is hope. And you have to give them hope. Hope for a better world, hope for a better tomorrow, hope for a better place to come to if the pressures at home are too great. Hope that all will be all right. Without hope, not only gays, but the blacks, the seniors, the handicapped, the us’es, the us’es will give up. And if you help elect to the central committee and other offices, more gay people, that gives a green light to all who feel disenfranchised, a green light to move forward. It means hope to a nation that has given up, because if a gay person makes it, the doors are open to everyone.

So if there is a message I have to give, it is that I’ve found one overriding thing about my personal election, it’s the fact that if a gay person can be elected, it’s a green light. And you and you and you, you have to give people hope.” 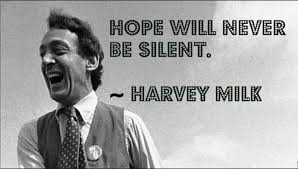