The article below was written quite a few years back when I was working as an atomic physicist. It still rings true today…

ABRAHAM PAIS relates in his biography of Niels Bohr that the renowned Danish
physicist once claimed to a friend: “I have made a great discovery, a very great
discovery. All that philosophers have ever written is pure drivel!”

The Lofoten Islands lie off northern Norway, far from the bustling crowds of
Paris and Berlin. Their lofty cliff walls rise straight up out of the cold blue
waters of the Norwegian Sea. The magnificence of the setting invites us to cease
our questioning and to imagine that all is known and that our minds can at last
be at rest. On Lofoten we can almost believe that infinite knowledge, is within
our grasp.

I arrived in Lofoten just days after visiting the Niels Bohr Institute in
Copenhagen. Fresh in my mind was the fact that Bohr had realised the limitations
which the then new quantum physics placed on our dream of infinite knowledge.
According to Werner Heisenberg’s uncertainty principle, we can never hope to
know the precise energy, time, position and momentum of a particle. And the
probabilistic nature of the wave function indicates that the act of observation
plays a central part in determining the outcome of an experiment. Bohr summed up
the philosophical implications of quantum mechanics by saying: “It is wrong to
think that the task of physics is to determine the nature of reality. Physics
concerns what we can say about nature.”

Yet more than thirty years after Bohr died, science continues to be
represented by some as the means by which infinite knowledge may be obtained.
Books with titles such as God and the New Physics by Paul Davies and
The God Particle by Leon Lederman and Dick Teresi are all classified
under physics rather than under theology in bookshops. And in Stephen Hawking’s
A Brief History of Time, we learn how theoretical physicists are
formulating the theory of everything. We are told that such a theory would
ultimately allow us to know the mind of God. Such an idea is deeply appealing.
We yearn for certainty in an uncertain world. But is it not the legacy of Bohr
that such a quest for certainty is an illusion? 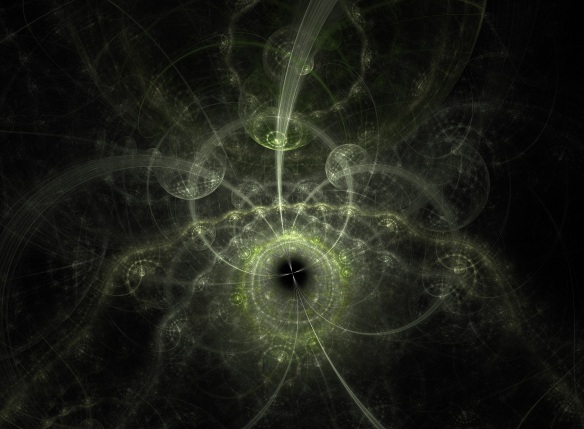 Rather than providing certainty, every major scientific advance has increased
our uncertainty, reduced our status as a species and undermined our sense of
purpose. Before Nicolaus Copernicus we enjoyed a privileged position at the
geographical centre of God’s Universe. Now we have come to realise that we
inhabit a tiny planet orbiting an average star in an unremarkable galaxy, adrift
in a vast impersonal cosmos. Until Charles Darwin came up with his ideas on the
origin of species, we occupied a niche unique among God’s creatures as the focus
and crowning glory of His creation. Science tells us, we are an accident of
fate. We evolved by chance through natural selection, a process that Darwin
described in a letter to the botanist Joseph Hooker, as one of “the clumsy,
wasteful, blundering, low and horribly cruel works of nature”. In our century,
the ideas of Bohr and Heisenberg, of Erwin Schrödinger and Paul Dirac,
have brought us face to face with the limitations of the most powerful tool we
have yet created for carving out an understanding of ourselves and the
cosmos.

But what are the implications if physics is limited in what it can say about
the Universe? Is physics an exclusively human enterprise? Could it really be
that the laws of physics apply only to us? If so, an alien species could have a
physics in which the speed of light is not constant, where the strong force does
not exist and where the Universe is not expanding. Could it explain why the laws
of physics are mathematical, and why the physical constants have the values they
have? And could it solve Einstein’s puzzle, that the most incomprehensible thing
about the Universe is that it is comprehensible? The true lesson of science may
then be that we are like sea urchins on the seafloor: using our limited sensory
inputs to make sense of our environment and in awe of our intelligence at being
able to so do, all the while sensing only a tiny fraction of what
is.

This dangerous idea threatens to knock away our only remaining prop—our
belief in our own intelligence. Without that belief, stripped of the security
blanket which science is providing, we would be forced to stand naked before
ourselves and face the limitations of our knowledge as a species. Then, secure
in the knowledge that we cannot know, we could at last let our minds be at rest.

Perhaps this is what it means to grow up.

This article originally appeared in New Scientist in March 1996.