I recently had the pleasure of listening to author and journalist Joris Luyendijk in conversation at the Dalkey Book Festival about his book Swimming with Sharks. Joris is an inspiring example of a journalist fulfilling a role that is essential for the health of democracy – dispassionate enquiry into the abuses within the financial system. The following post is my summary of Joris’ main findings in Swimming with Sharks, as well as a suggestion for something important he may have missed…

One of the main conclusions that Joris comes to after interviewing hundreds of insiders working in the City of London for his book and for his Guardian banking blog is that the financial system stinks. The following are the main structural defects he discovered in the current financial machine.

Reflecting on his experiences with the banks, Alistair Darling also wrote ‘The top management in banks both here and in the US failed to understand – or even ask – what was apparently making them so much profit and what were the risks.’ Which brings us to the heart of the dysfunction. Why did top management at the banks not even ask? A major part of the answer is because they knew they would not be held personally responsible. Historically within banking, partners were personally responsible for their organisations. While they earned lucrative bonuses when things went well, their fortunes were on the line when they did not. In other words, as Joris puts it, there was a bonus but also a malus – a financial penalty if things went wrong. The problem with banks today is that those who take the risks, at all levels including senior management, are not the same people who bear them. As the Crisis has shown, the people who bear the risks are us. 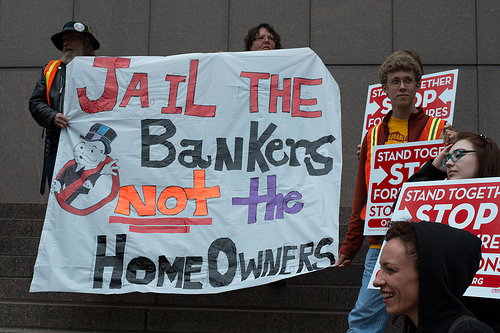 photo credit: Rally to demand accountability from the financial institutions and legal action against bankers via photopin (license)

So Is It All About The System?

In analysing the implications of such a dysfunctional corporate environment, Joris argues that blaming individual ‘greedy bankers’ misses the point. After all, human behaviour is largely determined by incentives. In the current set-up, perverse incentives are sending individuals, organisations and, one could argue, the entire capitalist system in the wrong direction.

‘One thing I believe does not help’ he writes, ‘is to reduce the problems with global finance down to individual character flaws… if you blame all the scandals as well as the crash on individuals you imply that the system itself is fine, all you need to do is smoke out the crooks… I am convinced that were we to pack off all the employees in the City to a desert island and replace them with a quarter of a million new people, we would see in no time the same kind of abuse and dysfunctionality. The problem is the system, and rather than angrily blaming individual bankers for acting on their perverse incentives we should put our energies into removing these incentives.’

I totally agree with Joris that the system matters and that the financial system today provides incentives that make people act in aggressive, exploitative ways that prioritise their own interests above the common good. But given the damage that individuals can cause within the system, I think it makes sense to pay attention not just to reforming the system but also to individuals whose psychology is such that they are most likely to cause such damage. And to individuals will also be most vehement in their opposition to sensible reform of the system.

There are a number of reasons why I think it is important to also consider the ‘character flaws’ of individuals. First, the environment which Joris identifies as being the norm within financial institutions provides the perfect fit for people with certain known personality disorders, namely psychopaths and narcissists, to thrive. Psychopaths have a lack of conscience that allows them to act ruthlessly in their own interests regardless of the consequences for others. People with narcissistic personality disorders feel entitled to exploit others and ruthlessly assert their ‘superiority’.

Second, as Joris argues convincingly, the world of finance is not an industry like any other and a handful of delusional people can cause immense damage. A handful of psychopathic and pathologically narcissistic people within the dysfunctional environment of financial institutions could cause, and I believe have caused, immense damage.

Third, considering the role of psychopaths and narcissists could help to explain not only why the culture within financial institutions has become so extreme. It could also explain why it is proving so hard to reform. The conflicts of interest and perverse incentives pervading the sector were exposed long ago. But the level of systemic change needed is simply not happening. The regulatory response to the crash of 2008 has been to fight the symptoms rather than the cause. Megabanks have not been forced to break themselves up into separate traditional commercial and high-risk investment parts. The same accountancy firms that missed or chose to miss all the erroneous or misleading items on the banks’ balance sheets are still auditing the banks and the same is true of the credit rating agencies. The system of zero job security continues. And banks are spending millions lobbying to ensure that reforms are as minimal as possible.

The role of psychopaths and pathological narcissists in the Financial Crisis is difficult to prove because it is a second order effect. Much can be explained without them. But including them in the analysis could help us to understand the extreme nature of the culture within financial institutions and why the sector has spiralled out of control. Including them also highlights, as Joris ably does, the importance of reforming financial institutions to guard against their influence and prevent future disaster.

6 thoughts on “Did Psychopaths Play a Role in the Financial Crisis?”