This… was not written ‘so that it will not happen again’, as the cliché would have it. This… was written because it almost certainly will happen again.

The Gulag is the most poignant expression of the psychopathic nature of Stalin’s regime. In 1922, just five years after the Bolsheviks had seized power, there were already eighty-four camps dotted across Russia. Faced with the vast numbers of prisoners they had arrested in the first decade of Soviet communism, the Politburo passed a resolution in 1929 officially establishing a network of corrective labour camps for ‘the colonisation of [remote] regions and the exploitation of their natural wealth through the work of prisoners [1].’

After Lenin’s death, Stalin quickly seized on the camps’ potential to address a number of economic and political problems simultaneously – the populating of the desolate far eastern and northern regions of the Soviet Union; the exploration and exploitation of the country’s vast natural wealth; the control through terror of the Soviet population; and the rapid industrialisation of the Soviet Union.

The Gulag grew spectacularly under Stalin right up to his death in 1953. By that time there were several thousand individual camps spanning the length and breadth of the USSR, holding a total of approximately two million forced labourers.

Waves of slave labour flooded the Gulag following its inception. Successive periods of arrested innocents arose out of the calamities of collectivisation, the Great Terror, and World War II. During the height of Stalin’s power, a well-oiled system of arrest, interrogation, prisoner transport, labour camps and slave-run industrial complexes formed the basis for the economic development of the Soviet Union.

The Gulag began at Solovetsky, a group of islands situated off the coast north-east of Leningrad. A former monastery, its church quickly became a place of torture and execution. It was here that the Bolsheviks first began to use mass slave labour for profit. The first prisoners arrived in May 1920 and by 1925 there were 6,000 prisoners on the island. One out of every four died of starvation, disease and over-work each year. 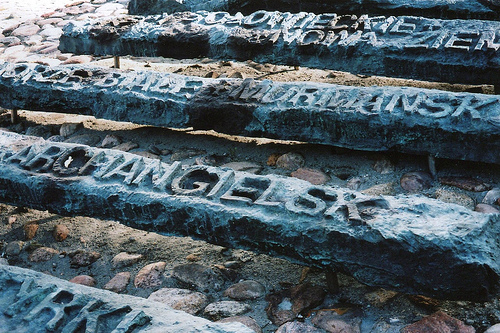 photo credit: stillunusual Monument to the Fallen and Murdered in the East via photopin (license)

As the Gulag spread, some projects, such as the construction of the Moscow metro and Moscow University, took place in towns and cities. However, the largest Gulag camps and colonies were located in the northern and eastern parts of the Soviet Union. It was in these remote locations that valuable resources, such as Komi’s coalfields, Norilsk’s nickel ores, Magadan’s gold mines, or the forestry reserves of Siberia, were to be found.

All of the major cities, along with the roads and railways in the region of Komi, stretching north-east from Saint Petersburg to the Ural Mountains, were built by slave labour. Beneath the treeless tundra and the maze of swamps and lakes that dot the region, lie the coalfields of Vorkuta. Immediately after the discovery of the coalfields, prisoners began to be shipped north to mine them. By 1951 Vorkuta held over 70,000 Soviet citizens forced into slavery in its mines. A loop road and railway track still connects Komi’s thirty mines, eleven of which are still working today. The road and railway are built on the remains of thousands who died building them, while the mines are still surrounded by the crumbling remains of prison camps and untended graveyards.

Norilsk, the most northern city in Siberia, is home to some of the largest nickel and platinum reserves on earth. One of the largest Gulag facilities, and one of its highest-priority camps, Norilsk produced metals vital to Soviet industry and the Soviet military. Between 1935 and 1953, the Gulag camps around Norilsk housed one-third of a million prisoners many of who died mining and processing its minerals in its perilous Arctic conditions.

Dalstroi was the name for the vast array of labour camps which covered a territory the size of Western Europe in the north east of Siberia. The region contains the world’s largest gold reserves. By the mid-1930s the gold production from the Dalstroi camps exceeded the entire gold output of the Soviet Union just a decade earlier.

The region contained Kolyma, the most deadly camps in the Gulag and one of the coldest inhabited places on earth. To reach Kolyma prisoners had to undertake a journey of up to three months, crossing the entire length of Russia before sailing northwards by ship from Vladivostock. Of 16,000 prisoners sent to establish the camps in Kolyma, over one-third died during the journey. Half of those who survived the journey didn’t make it past their first winter [2].

Kolyma was fed with tens of thousands of prisoners every year. The slave ships crossed the Sea of Okhost, each with up to twelve thousand people on board. One such ship, the SS Dzhurma, became trapped in pack ice in 1933 for nine months. All 12,000 prisoners on board froze to death. Another slave ship, the SS Indigirka, sank in 1939 with thousands trapped inside [3].

Kolyma’s slaves built the port city of Magadan, the road inland, and the mines in which they were worked to death. The number of dead is estimated at up to two million. At its height Kolyma was producing one-third of the world’s gold. Kolyma also had camps to mine uranium at Butugychag where high levels of radioactivity killed many of its workers.

A human being survives by his ability to forget.

In their frenzy to build a communist utopia, Stalin and the Bolsheviks exploited slave labour to a degree unprecedented in history. Quotas of arrests were issued to fulfil the labour demands of Stalin’s programme for industrialisation. People were arrested at random and forced to confess to fictitious crimes. Arrest by decree, sentence by decree without trial, no possibility of appeal… In the over four decades of its existence, eighteen million Soviet citizens are estimated to have passed through the Gulag[4].

Stalin’s death brought the system to a halt. Within days his successors began slowly to dismantle the Gulag. However, it wasn’t until glasnost and the 1989 revolutions that Gorbachev, himself the grandson of Gulag prisoners, finally disbanded the camps altogether.

In the decades between Stalin’s death and Gorbachev’s rise to power, Soviet labour camps continued to be used to suppress dissent. In the 1970s over ten thousand political prisoners were held in such camps. Thousands more were committed to psychiatric hospitals and prisons where they were subjected to electroshock and drug ‘treatment’ to facilitate their reform. Soviet psychiatrists enabled the commitment of dissidents to mental institutions by classifying political dissent as a form of schizophrenia, and by diagnosing struggles for justice as symptoms of a paranoid personality structure.

Stalin’s USSR, like Hitler’s Reich, was supposed to last for eternity. The sacrifices of Kolyma, Norilsk, Vorkuta and the countless other camps in the Gulag were meant to fade into oblivion – the glorious ends justifying the barbarous means. The camps and their victims were supposed to vanish into history. We were never meant to remember.